Drehr Place is one of three subdivisions in the Garden District and contains about 130 homes (see map). Between 1982 and 1998, through efforts of the Garden District Civic Association (GDCA) and residents, Drehr Place, and the other 2 subdivisions, Roseland and Kleinert Terraces, became historic districts in the National Register of Historic Places. Many homes have plaques designating this status. This was an honor but offered no protection from out-of-character development such as demolition and redevelopment, commercial intrusions, and widening of streets. 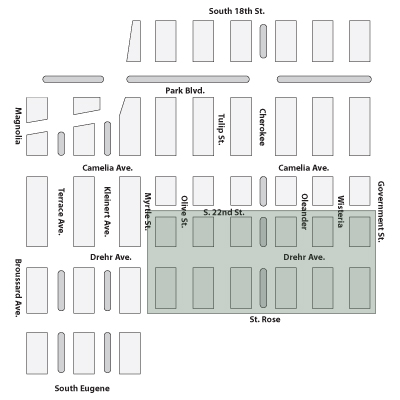 In Aug. 2004, because of efforts of various preservation groups including the GDCA, the Metro Council passed an ordinance establishing a Historic Preservation Commission housed within the Planning Commission that would review development in certified historic districts. The GDCA chose to seek certification of Drehr Place. They formulated protective guidelines that were approved by Drehr Place residents. In Oct. 2005, the guidelines were passed unanimously by the Metro Council. Historic protection of Drehr Place was achieved after nearly two decades of work by the GDCA Board and residents in coordination with city, state, and national governments.The benefit of living in Drehr Place is that development is restricted to a set of guidelines that retain the character of the neighborhood. In addition to this protection, research nationally suggests property values are enhanced in certified historic districts.