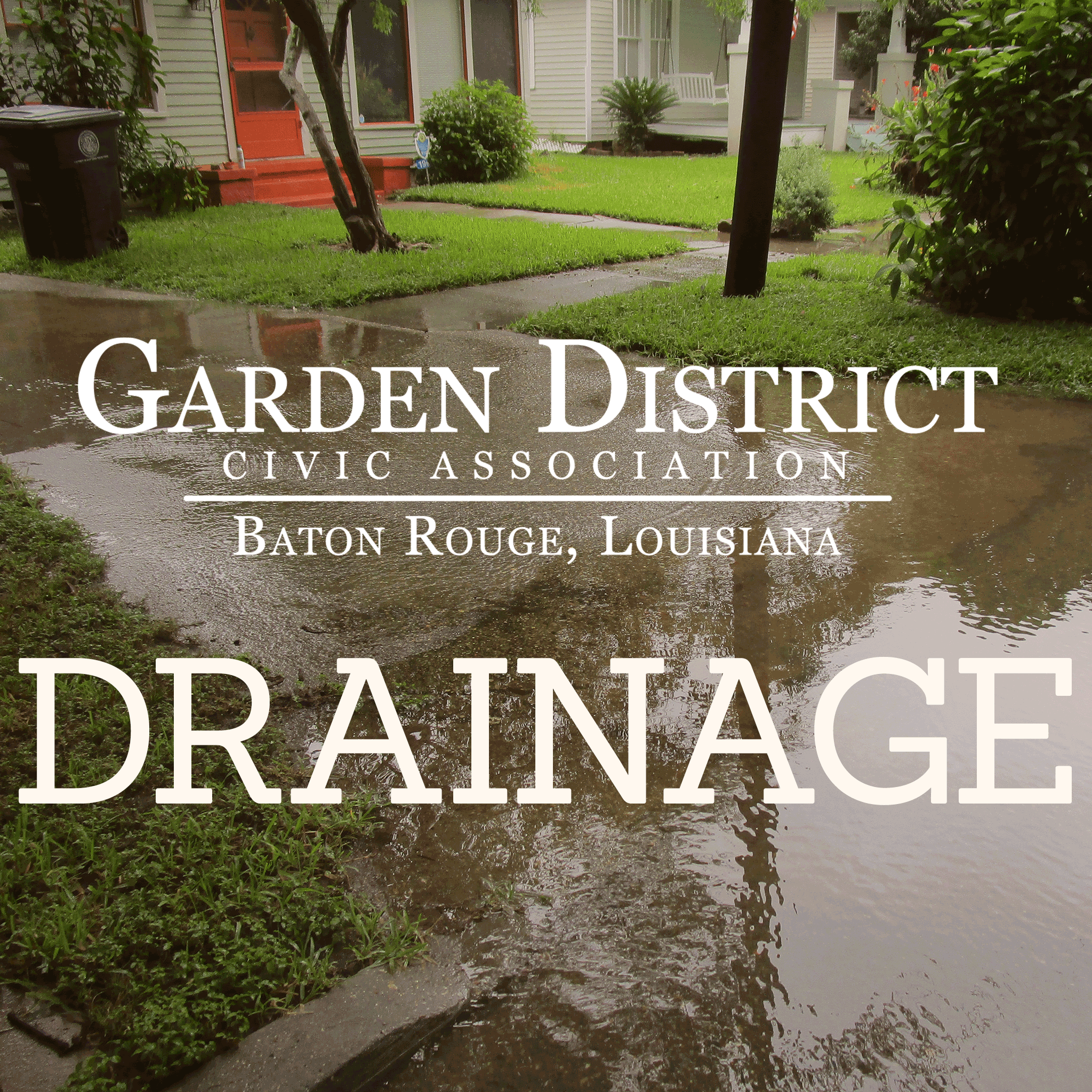 Drainage Problems in the Garden District

Tom Douthat, who moved here in 2017, noticed the drainage problems in his first few months in the Garden District. He is an Environmental Law professor at LSU. His house was swamped in the June 6th deluge in 2019, so he had incentive to look into the matter. Other neighbors and a meeting with the Mayor and Fred Raiford, Director of Drainage, supplied Tom with background information and updates. Tom explained to the GDCA Board what is happening.

Much of the Garden District drains to Dawson’s Creek near Catholic High School, but there is more water entering EBR’s drainage system than there used to be. When the water level gets high enough in Dawson’s Creek it submerges the outfall from our neighborhood and acts as a dam effectively preventing our neighborhood from draining. This is called a hydraulic dam, and it may be exacerbated by culverts on Broussard St. and Hundred Oaks Ave., which EBR is seeking federal funds to replace with bridges that would allow more outflow. Culverts have been working as dams and need to be fixed. Our water can’t get to Dawson’s Creek. The pipes aren’t large enough. This a principle theory why the water backs up in our neighborhood but then drains quickly once the water levels in Dawson’s Creek decline. Another possibility is that some localized drainage pipes in the neighborhood are too small, but the city does not currently have an inventory and map of its drains. Nobody knows the diameter of all of the pipes taking water out of the Garden District.  A map and model is being developed under the Stormwater Masterplan.

Part of the solution is more storage throughout Baton Rouge to slow the entry of stormwater into the larger drainage system and thus prevent our stormwater outfall into Dawson’s Creek from becoming dammed. There is no quick fix to this issue. Strategies to address are more difficult and more expensive in older areas like ours. The Department of Public Works and the Mayor’s Office are aware of the problem and the issue has been flagged for the consultants developing the EBR Stormwater Master Plan, and a commitment was made to hire an engineer to review this issue over the next months. There are additional federal funds that the city is pursuing that would be used to address this issue is awarded.