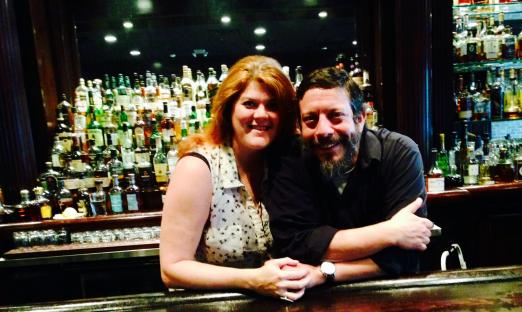 Garden District residents and owners of the bar, Brandolyn Tabor and Arthur Lauck.\r\n\r\n When you enter Lock and Key, you seem to leave the North College Dr. strip mall be- hind for New Orleans or New York, which is just what Garden District residents and owners of the bar, Arthur Lauck and Bran- dolyn Tabor, had in mind when they decid- ed to open a bar. With comfortable, clubby furniture, exposed brick, paintings in gilt frames, and a wall of artfully lit bottles of whiskey glowing amber behind the bar, the ambience is far from that of the establish- ment on the other side of the wall.\r\n\r\nFor Arthur, owning Lock and Key is a kind of homecoming, since his parents owned a bar by the same name in Lafay- ette during the seventies. He had thought about opening a bar for years–“It’s in his blood,” says Brandi– but a twenty-one year career as a photojournalist, the last fifteen at the Advocate, left little time to pursue the thought. After receiving an opportu- nity to retire early when the Advocate was reorganized, Arthur found himself looking for a new career.\r\n\r\n“We had a conversation on the front porch of our house on Cherokee,” says Brandi, “and decided that it was just too stressful wondering where his next job was going to come from.” With those thoughts, the idea of owning a bar turned from vague notion to a dream worth pursuing.\r\n\r\nAlthough the couple had no previous experience owning a service industry, Arthur sees a connection with his work as a photojournalist.\r\n\r\n“At the Advocate, I was trying to serve my community in my work. Now I’m just serving them in a different way.”\r\n\r\nAlthough short on practical experience, the couple had trained for their new career for years. “When we travel, we always en- joy going to bars,” says Brandi. “We like going to a new spot and figuring out what works, what we would want to do,” adds Arthur.\r\n\r\nThe couple is also lucky to have a pair of silent partners who allow them to focus on operations rather than financing. “That just doesn’t happen in this industry,” says Brandi.\r\n\r\nWhen, in September, Arthur heard of the available space while waiting in line at Garden District Coffee on Perkins. He hur- ried home, grabbed Brandi, still in her pa- jamas, and brought her to see the site of their future bar. By December, the space was open for business.\r\n\r\n“We would never be where we are with- out our staff,” says Brandi, and she attri- butes their ability to open with such success to the number of fantastic bartenders in Baton Rouge whom they already knew. Although they rely on the excellence of their staff, both Brandi and Arthur put in plenty of time working at or for the bar, usually sixteen or so hours a day. “Owning a small business is not a nine to five gig,” says Arthur. “If we’re awake, we’re working on the bar.”\r\n\r\nThe couple hopes to expand on their success by adding a menu of small plates in the next few weeks and building their Whis- key and Women events. They also plan to continue supporting the Food Bank with food drives, evident in the bin of non-perishable goods near the front door, and Tri- umph Kitchen, which gives high-risk teens life skills in the hospitality industry.\r\n\r\nCurrently, the bar offers happy hour from 4:30-7:00, with select cocktails half priced as well as wine and beer specials. Wednesday is “pianoke,” an open mike night for aspiring singers and musicians, who may choose to be accompanied by the house pianist. Thursdays and Fridays feature live piano from 9 to midnight, and Saturday showcases a jazz trio that occa- sionally expands to an octet.\r\n\r\nOn the last Saturday of May, the couple was at Lock and Key, of course, enjoying cocktails while listening to the jazz trio who had been joined by Wes “Warm Daddy” Anderson and a couple of friends from New Orleans.\r\n\r\n“We looked at each other and knew,” says Arthur, “what’s happening now is just perfect.”