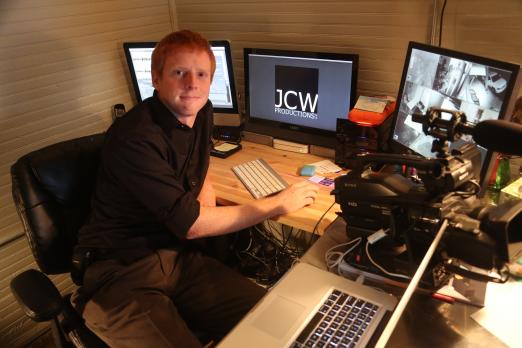 John Williams is in the process of renovating the building at the corner of Terrace Avenue and Perkins Road, across from the Garden District Animal Hospital. The building, which once housed the monthly art show, Stabbed in the Art, now is home to JCW Productions, a videography business that specializes in weddings and commercials but also offers still photography in the studio.\r\n\r\nThe reception area just inside the doors features three flat screen televisions, which loop a selection of commercials and videos the production company has created. Once the renovation is complete, the space will include a sound studio as well as the photography studio, space for editing, and offices.\r\n\r\nAt first glance, all of this seems like an unusual accomplishment for a twenty-year old recent LSU graduate, but John’s experience and determination belie his age, since he began video taping weddings when he was just thirteen years old.\r\n\r\n“One summer, I decided to mow lawns so I could save up money to buy a camera. I knew that if I had a camera, I could always make money,” says John.\r\n\r\nJohn attended a small high school, St. George’s Independent School, in Memphis, and one day brought his camera to school and had it out during his math class. The math teacher, Jeff Ruffin, asked if John would like to video the school basketball games, which eventually led to opportunities to video football and soccer games, too. Soon, John was broadcasting games on line, garnering a regular audience of 500 viewers and a chat room.\r\n\r\nThe math teacher was also instrumental in setting John on the path to video taping weddings, since Mr. Ruffin was the first groom to hire him. After that first wedding “my name got passed around, rippling through school, and [my business] blew up,” says John.\r\n\r\nAlthough St. George’s was small, they had a strong basketball program. “We had an amazing player and had the chance to play in a tournament in Boston,” says John. After that trip, he received a call from a Sports Illustrated writer who wrote an article about John’s work as a high school videographer. When in his senior year the basketball team won state, John received a championship ring along with the team.\r\n\r\nWith his high school experience behind him, there was only one place John wanted to go for college. “I wanted to go to LSU to film football,” says John. His high school’s athletic director placed a call for him, and John then spent 3 ½ years filming all football practices and games here at LSU.\r\n\r\nAlthough John spent 30 hours a week filming football games, he wanted to maintain his wedding videography business, but the move from Memphis cost him the contacts he had made during high school.  “I received $100 worth of free advertising when I signed up to advertise on Google, which led to $5000 worth of bookings,” says John.\r\n\r\nJohn quickly replaced and multiplied his high school wedding contacts. “You can’t film football for LSU and not meet tons of people and make connections,” he says.\r\n\r\nBetween his sophomore and junior years at LSU, John realized that he wanted to stay in Louisiana, as so many visitors do, for the culture. “I hated paying rent,” he says, so although only twenty, he was looking to buy a house, quickly settling on the Garden District as his preferred neighborhood. As he says, “I wasn’t going to buy anywhere else.”\r\n\r\nThe same week he bought his house on Camelia, John drove by the building at the corner of Perkins and Terrace. “I told myself if that building ever goes for sale, I’m buying it.” And, not surprisingly, he did.