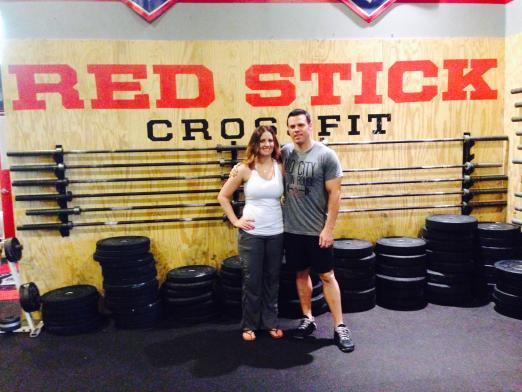 When Red Stick CrossFit first opened, it was conveniently located in the original owner’s back yard. When Andrew and Melissa Chicoine took over the operation at it’s current location in the Ogden Place Shopping Center on Government Street, it was very far from their backyard.\r\n\r\n“It took me 40 minutes to go seven miles,” said Andrew Chicoine of the commute to the gym when he and his wife lived in an apartment off of Bluebonnet. Their current Garden District location on Tulip Street near 18th is much better. “It takes us three minutes now,” says Melissa Chicoine.\r\n\r\nThe couple first became associated with Red Stick Cross Fit when they moved to Baton Rouge from San Antonio, Texas. Both had been involved in the fitness industry while in San Antonio—Andrew managed a large commercial gym, and Melissa had experience in “just about all management positions” in the gym where she was employed.\r\n\r\nAlthough both consider themselves native to San Antonio, they wanted to move to Louisiana after Andrew’s assignment to New Orleans as a member of the Coast Guard. “We really loved New Orleans,” said Andrew, and they were sad to leave when ousted by Hurricane Katrina.\r\n\r\nAfter finishing Andrew’s four years with the Coast Guard, the couple planned to move to Baton Rouge to attend LSU, but the opportunity to buy out the original owner of Red Stick CrossFit postponed Andrew’s graduation. “I couldn’t do this,” he said, indicating the gym, “and that.”\r\n\r\n“He actually has all the hours he needs to graduate,” said Melissa, which Andrew plans to do once he meets with his LSU advisor.\r\n\r\nThe Red Stick CrossFit opportunity arose from Andrew’s year of volunteer coaching at the gym between when they moved from Texas in 2011 and when they acquired it in 2012. Although the couple’s previous experiences weren’t in CrossFit programs, they both have enjoyed the regimen.\r\n\r\n“We like the community aspect of it. We help each other out,” said Melissa, “and make each other better.”\r\n\r\n“We have members who move here from out of town and don’t know anyone. They come here and meet their best friend,” adds Andrew.\r\n\r\nUnlike most gyms, CrossFit concentrates on a series of nine basic moves that form the core of the workout. Each day, they post the WOD, or workout of the day, which spotlights several of the basic moves performed usually for the maximum number of repetitions in a given time. As Andrew said, “It’s great for exercise ADD, because each day is a different workout.” The workouts are also quick and can be completed in an hour, including time to warm-up and cool down.\r\n\r\nFor Melissa, one of the great advantages of the workouts is their relevance to daily life. “We have similar moves to life,” Melissa said. “It’s like bending down to pick up a 40 pound bag of dog food.”\r\n\r\nAndrew adds, “We don’t use machines. We don’t run on treadmills, we run outside.” The workouts rely on more old-school equipment like kettle bells, or natural elements like crepe myrtle trunks, which have figured into past workouts.\r\n\r\nWhile half of the space is dedicated to CrossFit, the other side is geared toward weight lifting. “One of legendary weight lifting coach Gayle Hatch’s protégés, Matt Bruce, coaches out of there,” said Andrew. Bruce was an alternate on the 2012 US Olympic weight lifting team, and he is two time champion of the PanAmerican Games.\r\n\r\nMelissa and Andrew see a natural connection between weightlifting and CrossFit. “Weight lifting moves are really technical,” said Andrew, which dovetails with CrossFit’s emphasis on form. “A lot of really good CrossFitters got into weight lifting through CrossFit, and weight lifters get into CrossFit.”\r\n\r\nWith over 200 members, the gym has been successful enough to warrant a second branch, Red Stick CrossFit South at Essen and Anselmo, behind It’s Your Party. “We’re always trying to improve the gym,” said Andrew.\r\n\r\nOne of the benefits of the primary location is its proximity to LSU. “We have a lot of students who work out here during the school year,” Melissa said. Some of the students bring their parents to the gym to meet Melissa and Andrew, and the parents end up thanking the couple for their good influence.\r\n\r\n“Yeah,” said Andrew, “They are glad their kids spend their time here instead of black-out drunk.”\r\n\r\n“A lot of them spend four, five hours here with their friends and then go eat at a healthy restaurant,” adds Melissa.\r\n\r\nFor the last few months, the gym has taken a decidedly family friendly turn, since the arrival of son Peyton Chicoine seven months ago. Whether he goes into his parents’ business remains to be seen, but in the meantime, he does a mean dead clean with his kettle bell teething ring.