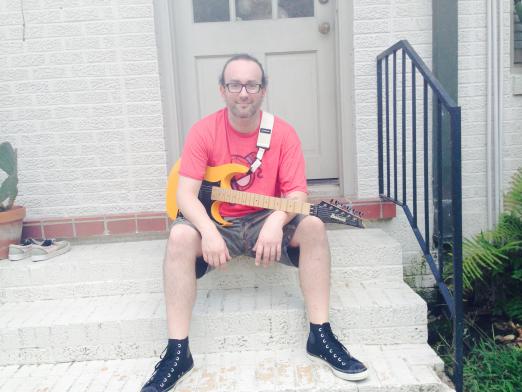 When Ursin de Roche first picked up a guitar at age eleven, he had no idea that one day he would teach guitar to the movie star daughter of a rock legend. As a sixth grader at Redemptorist Middle School in North Baton Rouge, Ursin started group guitar lessons instead of Spanish or any of the other electives, with his mother’s blessing. Group lessons led to private lessons through his teens, and before long, he was majoring in music at South Eastern University and then at the University of La Verne in California.\r\n\r\nAlthough he returned to Baton Rouge without a degree, his lack of matriculation didn’t interfere with his employment. “If you take, say, the flute,” says Ursin, “your instructor will probably have a music degree. Guitar isn’t like that.”\r\n\r\nSoon after moving back, Ursin answered an ad posted on Craigslist. “A guy running a local music studio on the east side of town was looking to expand his business on this side of town,” says Ursin. “At the time, he didn’t have any solid teachers on this side of town.”\r\n\r\nOnce hired, Ursin began teaching lessons out of what is now Mid-City Bikes on Government Street next to the Garden District Nursery. Ursin’s boss was approached by his high school friend and movie producer, who was looking for someone to teach Liv Tyler how to play the guitar for the movie “The Ledge,” that was filming in downtown Baton Rouge. Ursin’s name came up, and the producer contacted him about teaching Ms. Tyler.\r\n\r\n“Then there were two weeks of conference calls–definitely a vetting process,” says Ursin. During the calls, sometimes with a group of people and sometimes one on one, Ursin answered a variety of questions.\r\n\r\n“They asked me wild stuff—what did I have for breakfast, do I drink a lot, how often do I go on the internet, how many hours of TV do I watch a week. They wanted to know if I knew who Liv Tyler was, and I said, ‘Yeah, Steven Tyler’s daughter.’”\r\n\r\nOnce the production team had determined that Ursin wasn’t a secret Liv Tyler stalker, and they had approved his guitar skills courtesy of YouTube videos, it was time for Ms. Tyler to make the final call.\r\n\r\n“They asked me to come down to the set to meet her,” says Ursin. “They were filming above Lucy’s in a really old apartment.” After a brief introduction—“Hey, Liv, this is Ursin deRoche”—Liv asked him if he smoked. Ursin replied, “Yeah,” and she said, “Let’s go have a cigarette on the balcony.”\r\n\r\nThe two smoked and chatted for a while—“She was just like a regular girl, like my sister”—until Ms. Tyler decided that Ursin would do just fine.\r\n\r\nUrsin’s assignment was to teach Ms. Tyler to play a rendition of Ave Maria arranged for solo guitar. “The director told me to get her to the point where she could have been playing, with her hands in the right places, but that they’d dub in a professional when they got to editing.” Ms. Tyler had other ideas and insisted, with language inappropriate for a community publication, that she really be able to play it.\r\n\r\nFor the next few weeks, Ursin says, “I was on call 24/7. They’d call me at 8 AM or 2AM and ask me to come down to her trailer. Sometimes she’d show, and sometimes she wouldn’t and they’d pay me to sit in her trailer, watching TV and eating free catering.”\r\n\r\nWhen Ms. Tyler realized she wasn’t making much progress in the brief bits of time squeezed in between takes, she called Ursin to make other arrangements.\r\n\r\n“She asked if I minded coming down to her hotel,” says Ursin. “She was staying at the Hilton.” When he arrived, she asked if he wanted something to eat or drink, and despite his answer to the negative, she insisted, picked up the room service menu and ordered most of the items listed.\r\n\r\n“You know how it usually takes half an hour, forty-five minutes to get your room service order?” asked Ursin. “In five minutes there was a knock on the door, and the hall outside was lined with waiters pushing silver serving carts.” For the next few hours, Ursin worked with Ms. Tyler, until she was satisfied with her progress. When the movie was released in 2011, it was Liv Tyler playing Ave Maria for solo guitar.\r\n\r\nAs is so often the case, one great opportunity led to many more. “It was like dominoes falling,” says Ursin. He was featured in 225, was given the cover of the Baton Rouge Business Report, appeared on Liv Tyler fan web sites, had stories in The Sound guitar magazine and on a French guitar web site. He also garnered endorsement deals from Ernie Ball guitar strings, Intex cables, and Music Man guitars. The band he was with was able to play all over the South, due to his fat stack of press clippings.\r\n\r\nEventually, as Ursin says, “that all ran its course.”\r\n\r\nToday, he’s self-employed, teaching anyone, famous or not, how to play the guitar.