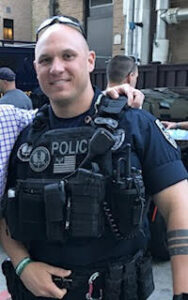 For those of you that are new to the neighborhood, and for those seasoned neighbors who are generally concerned about crime, we would like to give you an update on the BR police officer who is responsible for monitoring our neighborhood. Corporal Seth D. Gauthier is from Louisiana, just south of Lafayette. He relocated to Baton Rouge in the early 1990s and graduated from Tara High School before attending Southeastern Louisiana University.

After the 9/11 attacks, he joined the U.S. Marine Corps and served for 20 years as a Military Policeman, Criminal Investigator, and as a Recruiting Support Officer. During his tenure in the military, he deployed twice in support of combat operations Operation Enduring Freedom/ Operation Iraqi Freedom, and twice in support of NATO Operations in Ukraine and Suriname. He started his local Law Enforcement career in 2008, and he’s been with BRPD since 2012. Currently, he is assigned to the Full-time Special Weapons and Tactics (SWAT) team, on which he has served for the last 7 years.

As always, in case of an emergency, contact 911 for immediate assistance. If it is a non-emergency, but Police are needed, you can contact the BRPD Police Dispatch Center at 225-389-2000. If you would like to pass information to Seth or the other Patrol Officers, you can contact Mike Helms via his email, and he will forward that information to Seth and the other officers.

Remember to cover the basics – lock your car doors, don’t leave things in plain view, and don’t leave anything of value inside your vehicle, such as purses or firearms. If you have a security camera installed, it’s amazing how much the footage collected can help officers at times. Also, report street light outages and other safety issues through the Red Stick Ready website or app. Stay safe!

As many of you may already know, last week an LSU student was attacked and killed while waiting for the train to pass on Government Street. The members of the Garden District Board were horrified to learn about this crime committed during the early morning of September 16th. The proximity of the crime to the Garden District is troubling, and the sense that this was a “wrong place, wrong time” crime further heightens anxieties in the community. Like everyone, we hope that the perpetrator(s) are caught quickly and brought to justice.

Members of our community are the eyes and ears of BRPD, so if you or your neighbors have any information about this crime, please report it to the police immediately. BRPD encourages anyone who may have witnessed or has evidence (security footage) of this event or any others to contact Detective Justin Becnel (Cell: 225-413-8998; Office: 225-389-3848). Any information can be helpful to ensure the suspects are prosecuted to the fullest extent of the law. Importantly: if you are a victim or witness to any crime, please contact or stay in contact with BRPD.

Beyond this, we encourage residents to be proactive in terms of your own safety practices and behaviors. You may ask yourself:

Currently, about half of our annual membership dues go toward security patrols for the neighborhood. It’s important to keep your membership current and to encourage your neighbors to become members of the GDCA because the more dues paying members we have, the more security efforts we can fund. Stay safe out there!

Like previous years, the GDCA will continue increased security patrols throughout the summer months. Additional security patrols are funded by annual dues, and with less than 25% of the homes in the Garden District participating members, we can only fund a limited amount of patrol hours. If you are interested in becoming a member, renewing your membership or including additional security funds, please visit gdcabr.org.

Arrests Made on Recent Crime Spree

On Thursday, May 26, 2022, Baton Rouge Police Department arrested four individuals responsible for the recent crime spree in and around our neighborhood. This was a Tier 1 Top Priority for BRPD. The suspects have been connected to at least seven separate events that occurred in the past approximate10 days, including the events on St. Rose Street, on S 22nd Street and Cherokee Street (previously reported as S 18th Street and Cherokee Street), and on Park Boulevard and Terrace Avenue. Other events occurred as far east as the Mid City Beer Garden and as far west as Brice Street across from Alford Safe and Lock.

BRPD encourages anyone who may have witnessed or has evidence of these events or any other related crimes to contact Detective Justin Becnel (cell 225-413-8998, office 225-389-3848). Any information can be helpful to ensure the suspects are prosecuted to the fullest extent of the law. MOST IMPORTANTLY! If you are a victim or witness to a crime, please contact or stay in contact with BRPD.

BRPD also reviewed the past six months of activity in the Garden District and with the exception of the activities of the four arrested suspects, we remain a very safe neighborhood. They attribute this in part to it being a neighborhood where folks know their neighbors, and there are almost always eyes on the street (likely due to the large number of lovely porches throughout the neighborhood).

So this Memorial Day weekend, crack a cold one on your porch (or if you’re like me, your front stoop), say hi to your neighbors (or invite them over if you are so inclined), and enjoy the beautiful weather.